By clicking "Accept All Cookies" or continuing to browse our site, you agree to the storing of cookies to offer you a better browsing experience, analyze site traffic, personalize content, and serve targeted advertisements (Learn More).
Due to ongoing labor and supply chain issues, some orders may be delayed. If you are concerned with a specific in-hands delivery date, please contact us at 855-632-8520 to confirm item availability, processing, and delivery times.
Follow Us:
Search
To order by phone or for product assistance Call Toll Free: 855-632-8520
Home > Filing Supplies > Healthcare Forms > Narcotic Control Sets 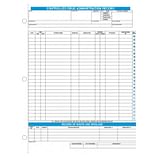 Filing Supplies at The Supplies Shops